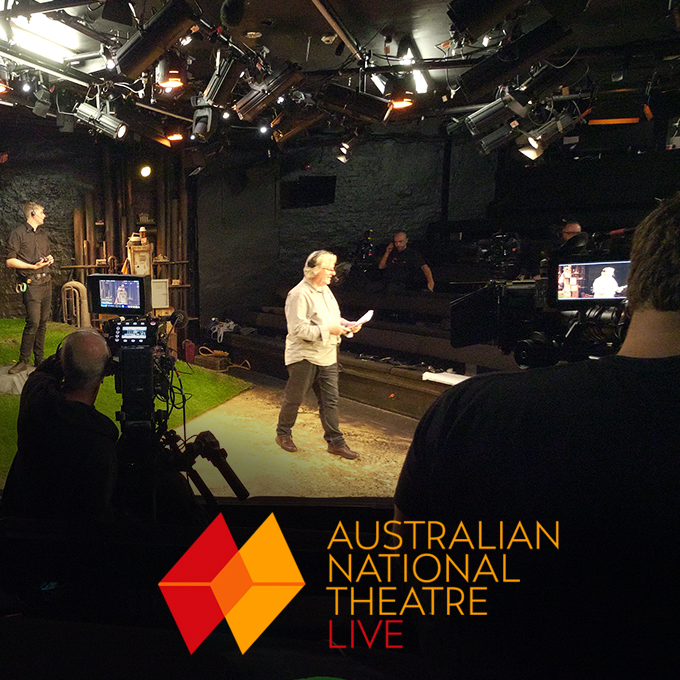 It’s undeniable that Australia has a wealth of live theatre talent, with works by our world-renowned playwrights produced regularly for keen audiences in major cities around the country. It’s also undeniable that the ‘tyranny of distance’ within Australia means that many who would love the opportunity to see these performances are simply too far away.

Seeing this demand, the team from Australian National Theatre Live (ANT Live) is capturing these terrific live performances with the latest camera technology and sharing them with a wider audience, supporting their distribution and screening in cinemas around the country, including rural and regional Australia. 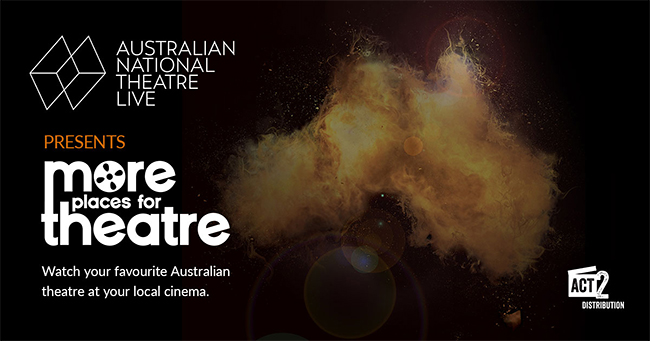 “We were aware of the vastness of this country and how people miss out unless they are on the eastern seaboard. We brought together our respective talents in film production and the theatre world to found ANT Live in 2010.
“We knew that technology was improving and that with our combined skills, we would be able to achieve high production values. Advancements in digital broadcast equipment meant everything was so much simpler and cheaper. I believe ‘Away’, the production that we recently filmed with the Panasonic VariCam in Melbourne, is going to be our benchmark.”
– Grant Dodwell

Shooting a feature film in a day 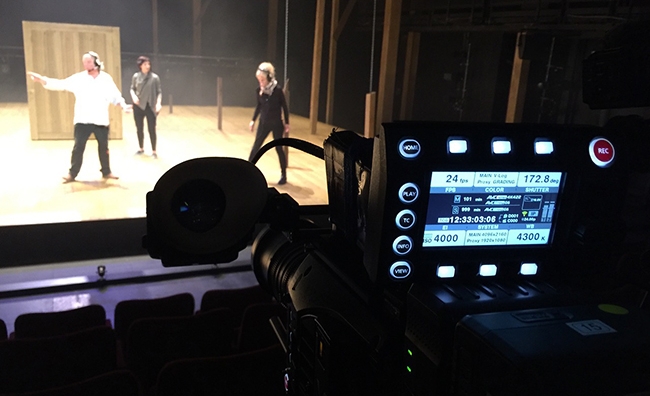 Although technology may have progressed in leaps and bounds, the team still faces the challenge of setting up and shooting a feature-length production in a tight window to fit within a theatre company’s existing performance schedule.

ANT Live treats the whole project like shooting a feature film, only in a day. In every sense it is a theatrical performance being filmed, so they capture it with an audience, just like a regular production. The finished film must capture the original essence and energy of a live theatre performance. ANT Live makes no adjustment to the original performance while filming, and all microphones are hidden.

“However, we are also able to capture wide shots, close ups and establishing shots. Using the Panasonic cameras, there’s a lot more work done in the edit, which makes the end result very consumer-friendly and engaging.”
– Grant Dodwell

ANT Live also acknowledged the role of rental houses Lemac and Videocraft in providing the equipment and vital pre-shooting technical support needed to bring ‘Away’ and ‘Diving for Pearls’ to life. 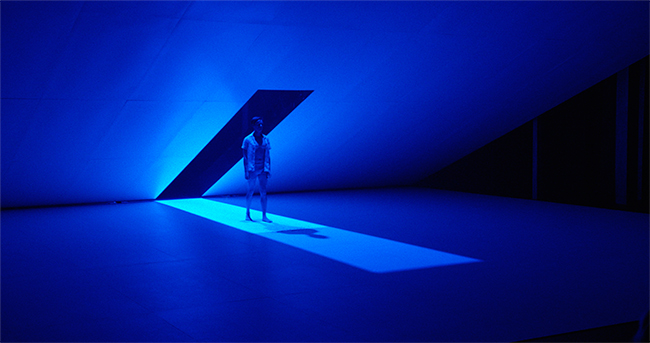 Influencing the switch to VariCam for the two productions was the fact that the ANT Live team were spending a lot of time on colour grading because some of the large sensor cameras previously used had different responses to the LED lights that are used in theatre. In addition, some models didn’t shoot continuously for longer than 30 minutes.

“We work with the lighting designers in the theatre, but we don’t ask for adjustments from the theatrical lighting. The beauty of using the VariCam is that we don’t have to do any of that. And we have very little grading to do because all the cameras have been matched so well. The highlight for us is the amazing skin tones that no other camera can get.”
– Grant Dodwell

The team was very pleased with the Varicam’s performance in low light situations, which was essential in delivering a high-quality finished production.

“We used the VariCam’s ISO capabilities to our advantage. In ‘Diving for Pearls’, there is one particular shot where our hero has doused himself in petrol. There’s only one spotlight on him and being able to capture that gives the scene an ‘operatic’ level.
“The other big advantage from my point of view, was the depth of the black levels. In the case of the Griffin Theatre, we have cameras facing the audience with other cameras in it. When it’s finished, you don’t see the other cameras, they are lost in the black – and there are 5 cameras in the shot. I defy anyone to see the cameras. The black levels are so profoundly black that they are rendered invisible.”
– Grant Dodwell

A perspective from the Director of Photography 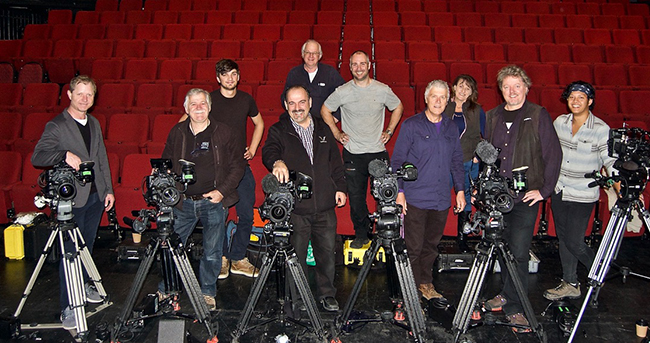 Experienced Australian cinematographer Con Filippidis was Director of Photography for ‘Away’, leading a talented team of camera operators – David Richardson, Aldi Godjali, Noel Evans and Louis Puli – shooting on two VariCam 35s and three VariCam LTs, with LUMIX GH5s used for locked off shots. Fujinon Cabrio lenses were used on all the VariCams. Con was also camera operator and VariCam consultant on ‘Diving for Pearls’, working with DoP Paul Howard.
Con had shot theatre performances in the past, but usually with 2/3rd inch cameras and nothing to the scale or quality of ‘Away’. He believes the primary benefit of shooting with the VariCams is their outstanding low light performance, which allowed the operators to capture the original lighting design of the theatre production.

“Basically with other cameras you can’t shoot live theatre that is lit for an audience, not lit for the cameras. In previous productions, the cameras used struggled with focus in low light.
“VariCams are the only cameras with dual native ISO of 800 and 5000. The VariCams also have a great dynamic range down to 14.5 stops. We could expose really well for low lit scenes, with increased depth of field shooting at 4000 ISO from a 5000Base ISO. At this setting we found our average exposure for a normally lit scene was T 5.6.”
– Con Filippidis

Con explained that they were consistently able to reproduce the intent of the lighting designer.

“For example, in Diving for Pearls, there was a sunset scene that was orange and very warm, and a bright day that was very blue. The VariCam could handle all the colour ranges really well when set to 4300Kelvin, monitoring in a Rec 709 LUT in the viewfinder. In low lit scenes, the colours are still true and vibrant, and the VariCam reproduces skin tones very faithfully. The pictures look amazing with dark, rich blacks and subtle colours.
“All the VariCams shot with Fujinon Cabrio zooms, which allowed us to match perfectly and are very clean and sharp. We used zoom demands to follow the action ENG style smoothly and quickly. We wanted to have the dramatic impact of a close up at the right moment, using wide shots and creating pacing through editing, but the movie still has to make the cinema audience feel they’ve gone to see a live theatre play.”
– Con Filippidis

“It’s important to shoot in 4K for cinema release to future-proof your work and because it’s the best quality you can record in. Making a 2K DCP from a 4K acquisition is going to be better than originating in 2K for a 2K finish. Using 4K also allows you to crop into the image in post if so desired.
“I’ve seen the finished result from ‘Away’ and I was blown away at the quality. The pictures were amazing, the lighting design was fantastic, and the cameras captured that lighting flawlessly. A lot of the time when you’re shooting a film, you have to bump up the levels for the cameras, otherwise they are underexposed. Not the case with the VariCams.”
– Con Filippidis 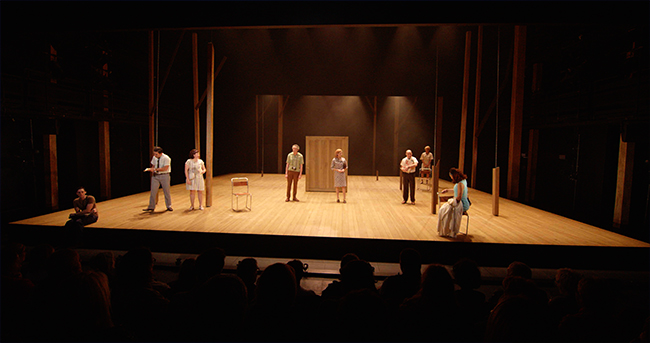 Grant Dodwell concluded that using the VariCams is an ANT Live differentiator that is opening up theatre for a much wider audience.

“It’s a world-class offering. Because the cinemagoer is seeing a theatre performance, except that it’s in a cinema. We give the viewer a sense of the spatial positioning of the cast and the audience. You see levels of acting ability that you never see on film, as you are watching one performance over two hours.
“We get a lot of positive feedback – particularly in the bush in rural and regional Australia. We’re not a replacement for theatre, we’re augmenting it, and the feedback from audiences is that it’s like being there.”
– Grant Dodwell

Find out more about Australian National Theatre Live at www.antlive.com.au.