ACMI, the Australian Centre for the Moving Image, at Federation Square, Melbourne, is Australia’s national museum of film, video games, digital culture and art. It’s undergone a massive A$40m upgrade, that has addressed virtually every space in the museum. The technology has also enjoyed a total overhaul.

The ‘Story of the Moving Image’ is the new ‘centrepiece’ exhibition. A journey through the past, present and future of film, TV and video games, it’s no longer a ‘permanent’ exhibition, it’s designed to evolve and respond and is packed with interactive experiences.

Short Throw Rescue
The Story of the Moving Image is replete with display technologies — with more than 100 Panasonic commercial LCD panels and 20-plus Panasonic DLP laser projectors. It’s a lesson in using the best technology for the application, as ACMI’s project manager for the renewal work, Evan Davies, explains: “The Panasonic projection really serves the content well and allows us to be creative with the way we present that content. For example, there’s an artwork of four projections on screens, which is quite a large piece and beautifully shot. Technically, it looks relatively simple and it fills the space with movement and colour. I can assure you, it wasn’t technically simple. One of the projections involves a curved screen, but not uniformly curved — it turns a corner three quarters of the way down its length. It was a real head-scratcher. The space didn’t lend itself to using two projectors and edge blending. A brand new Panasonic lens came to the rescue. It’s called the 020 [ET-DLE020] ultra-short throw zoom lens. It’s gigantic and it sort of defies the laws of physics — none of us believed it would work. We examined the specs and we did all the mock-ups and we didn’t believe it till we saw it. The lens allows us to cover a huge area from a crazy-short distance, combine that with the internal geometry correction of the projector and we made it happen.” 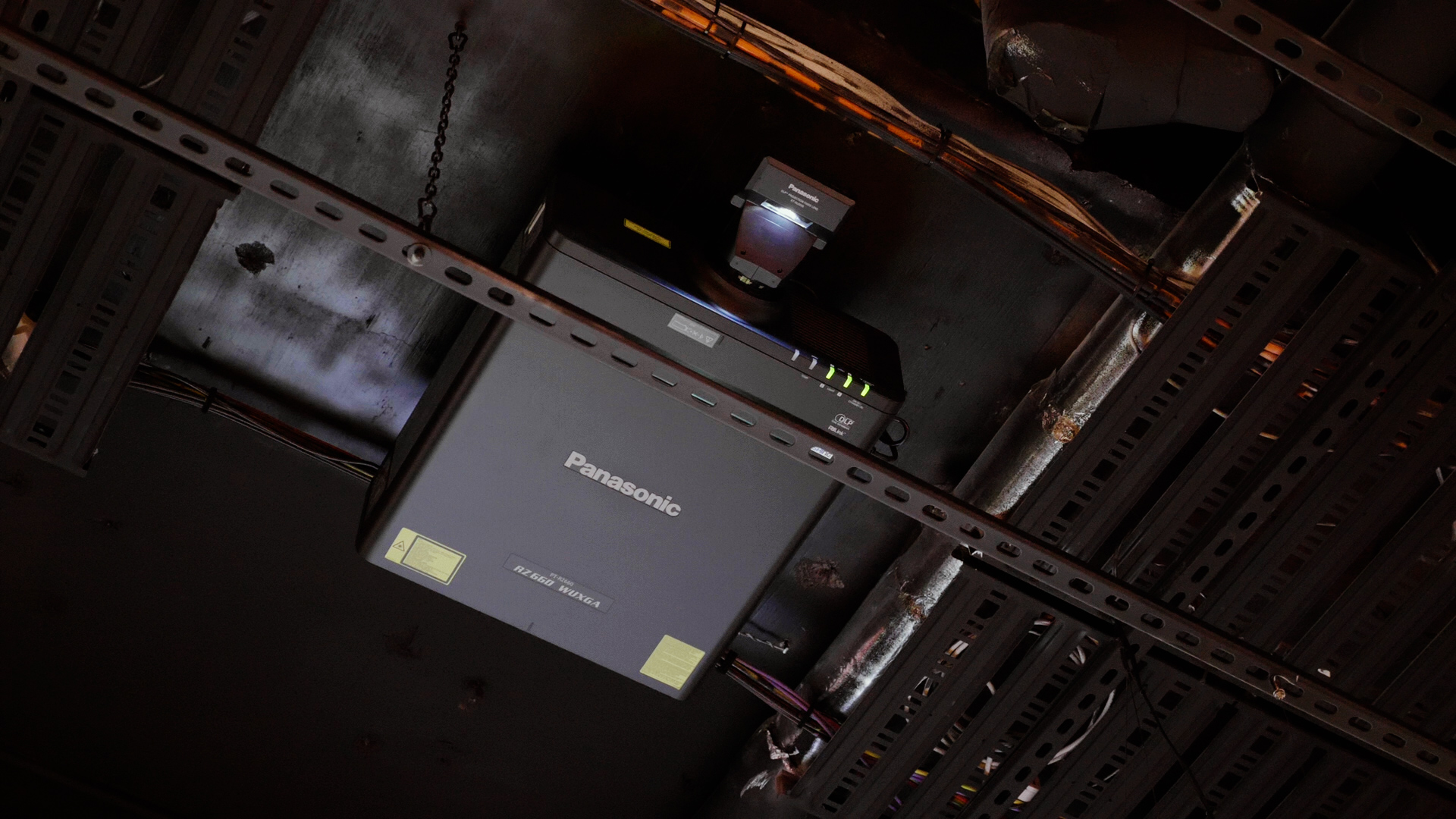 Given the low ceilings and exposed services of the exhibition space, the Panasonic ultra-short throw zoom lens was joined by a whole bunch of other UST lenses that allowed the team to shoe-horn the projectors into the cramped ceiling spaces while never impinging on the visitors’ experience.
Evan: “Everywhere we went to hang a projector, we couldn’t. We haven’t used a single standard lens in the exhibition anywhere. Luckily Panasonic had a lens for everything.”

Constellation Consternation
One of the showstopper exhibits is the Constellation space, which comprises six interactive touchscreen tables with an interface developed by Grumpy Sailor and a data visualisation called Entities, designed by OOM Creative and More Studio. The Constellation takes the items collected by visitors on their Lens (a NFC disc developed by the museum) throughout the exhibition and connects them up to hundreds of other films, TV series, artworks and videogames beyond the scope of the gallery. The visualisation is a piece comprising five Panasonic laser projectors edge blended onto a curved screen. The content is highly detailed on a black backdrop. It was a finicky installation, where edge blending black is notoriously difficult.

Evan Davies: “Video content is a lot more forgiving than super detailed data animations. The black banding of the edge blending was very noticeable initially — it looked terrible. A feature on the Panasonic projectors saved our bacon. It allows you to turn the black levels down on the un-blended areas. I’d never heard of people doing this or knew of the feature, but it evened everything out, and essentially saved the display.”

Adapt & Respond
The Story of the Moving Image is a delight. And thanks to the design it has the capacity to adapt and respond to significant changes in the areas as and when they occur. After all, if COVID has taught us anything, at least it’s to be prepared for the unexpected.

Read the full story of the ACMI redevelopment here: https://www.av.technology/projects/image-is-everything