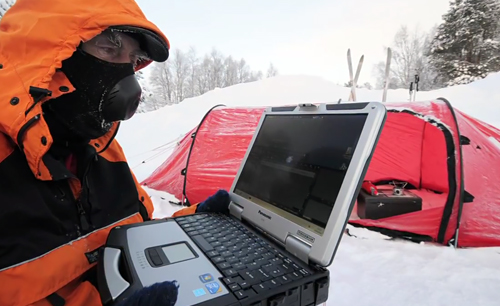 Panasonic has provided us with the ability to communicate visually and by computer quickly and efficiently in the most awful circumstances to all our sponsors, educational outlets, and charity to make maximum use and raise maximum money.
– Sir Ranulph Fiennes, named the greatest living explorer by the Guinness Book of World Records.

An expedition to cross Antarctica during Polar winter – hailed as the greatest test of human endeavor remaining on Earth – has come to an end. In their quest to conquer the last polar challenge, the explorers of the expedition, called “The Coldest Journey,” also had a chance to push durable technology to new limits.

Antartica 5During the expedition, the team covered more than 186 miles and climbed from sea level almost 2 miles up to the polar plateau. This is the furthest distance and longest period that any expedition has travelled in the polar winter months. Spearheaded by veteran British explorer Sir Ranulph Fiennes, the team of polar explorers faced severe environmental factors ranging from temperatures as low as -128° F to 24-hour pitch-black darkness, as they collected scientific data on the effects of climate change to form the basis for an education program. Throughout the journey, the team also raised funds for the charity Seeing is Believing, an international initiative to help tackle avoidable blindness around the world.

The team abandoned its goal of crossing the Antarctic landmass in June when it reached crevasses that were larger and deeper than expected. Sir Ranulph’s explorers encountered chasms big enough to swallow their vehicles, near-impossible to spot in the darkness and snow cover. Instead of continuing, the team turned its attention on completing its scientific projects before departing Antarctica in late November. Sir Ranulph himself was forced to abandon the expedition earlier than the rest of the team due to injury. 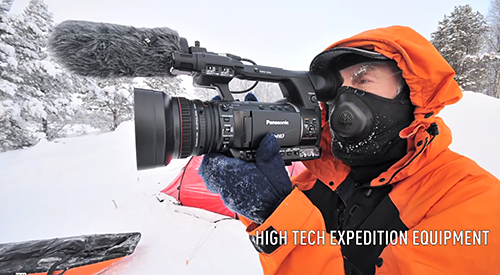 We need to have cameras that will operate far beyond the norm. Panasonic produced the roughest, toughest, best stuff for outside.
– Sir Ranulph Fiennes.

Providing both durability and cutting-edge innovation, Panasonic was chosen as the official technology partner of the expedition. Using Panasonic equipment, the team kept in touch with home base, collected and analyzed scientific research data, captured their experiences and shared them with colleagues and audiences back home.

At the heart of the operation were Panasonic’s semi-rugged Toughbook 53 laptops and a mix of professional broadcast and consumer imaging equipment, from AG-HPX250 P2 HD professional broadcast cameras to HC-X900 camcorders. The Toughbook mobile computers were used to facilitate the expedition’s scientific experiments and communications via an Iridium sat-link, as well as edit footage and photographs taken on Lumix digital cameras and Panasonic camcorders. 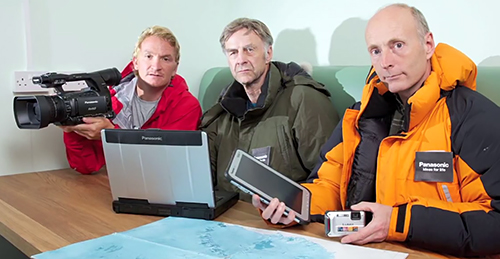 When you are choosing the equipment and the people, you must not make mistakes. You get one wrong piece of gear or one wrong person can mock everything up.
– Sir Ranulph Fiennes.

Although it is considered one of Panasonic’s semi-rugged models, the Toughbook 53 laptop is MIL-STD-810G certified to withstand a range of extreme conditions including 36-inch drops, shocks, vibration, humidity, altitude and dust. It’s tested for resistance to temperatures as low as -60° F (non-operational) and 32° F (operational). It’s also tested for temperature shock: testing procedures call for booting up the device after transitioning quickly from 140° F to -4° F. Similarly, the AG-HPX250 1/3″ 2.2 megapixel P2 handheld camcorder, designed for shooting scenarios including reality TV production, documentaries and news-gathering, has an operating temperature range of 32° F to 104° F.

Before embarking on the trip, the Panasonic products were put to the test through field exercise and Cold Chamber training in Sweden. In one test, the AG-HPX250 P2 HD professional video camera was able to continue filming flawlessly for 45 minutes in frigid -72°F temperatures.

Sir Ranulph, who spent more than five years planning the trip, originally contacted Panasonic to request support with helping to capture the expedition’s groundbreaking discoveries. Sir Ranulph stated, “When you are choosing the equipment, you mustn’t make a mistake.”

Tristam Kaye, Operations Manager for The Coldest Journey, added “it would be incredibly difficult to work in these extreme conditions for up to six months without the caliber of Panasonic equipment.”

In addition to its scientific research, the expedition was able to raise more than $2 million for Seeing is Believing, which will be used to provide eye care in 25 countries around the world. It’s not too late to donate now.

We at Panasonic congratulate Sir Ranulph and the entire Coldest Journey team for their historic accomplishments, and thank them for putting our technology’s durability claims to the ultimate test.

This article was originally publish at www.panasonicforbusiness.com.