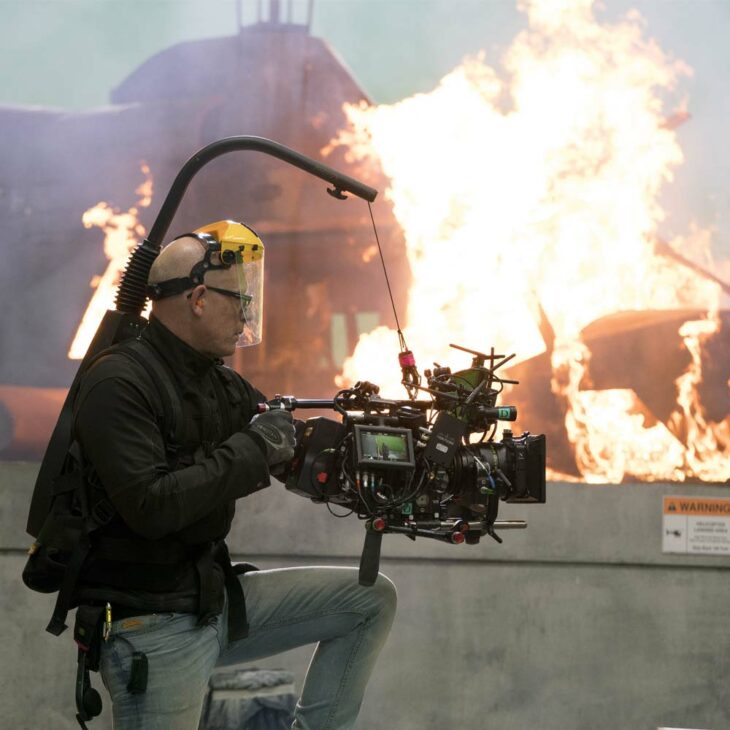 Angel Has Fallen (2019) is the third instalment in the ‘Fallen’ film franchise, following Olympus Has Fallen (2013) and London Has Fallen (2016). Directed by Ric Roman Waugh (Shot Caller, Snitch, and Felon) and staring Gerard Butler, Morgan Freeman and Jada Pinkett Smith, this blockbuster’s storyline follows United States Secret Service agent Mike Banning (Butler) as he races against time to clear his name after being framed for an assassination attack on the US President, Allan Trumbull (Freeman).

Following his work on ‘The Hitman’s Bodyguard’ Director of Photography Jules O’Loughlin ASC ACS, who has built a solid resume of great action projects with strong dramatic performances, was approached to shoot this film. Waugh was very clear from the first meeting with O’Loughlin that he wanted to reboot this franchise into a film that focused as much on its dramatic aspects as it did on high octane action sequences. He spoke about doing for the Fallen Franchise what Logan had done for the X-MEN franchise in bringing a gritty realism and an edge to its cinematic landscape – a space that O’Loughlin was greatly suited to with his own extensive body of work.

The resulting film is impressive in its dynamic stunt sequences, nail-biting action, and most of all with the heart that comes through the great dramatic performances of the leading performances from both Gerard Butler and Nick Nolte.

Location and stage work was done in both London and Sofia doubling for Washington and Virginia.

“Like a lot of films these days you are faced with a brutal shooting schedule. Filmmaking has to be done at speed whilst maintaining a high level of quality. With ‘Angel Has Fallen’, we had a very tight schedule coupled with several unforeseen complications” 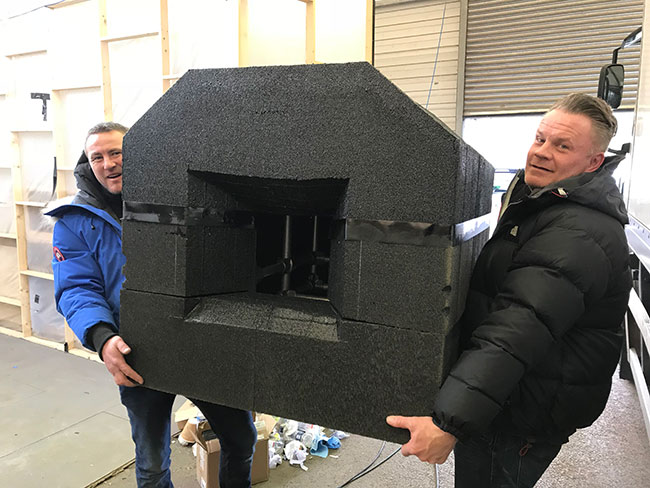 Crash box made for the VariCam LT for the lake sequence 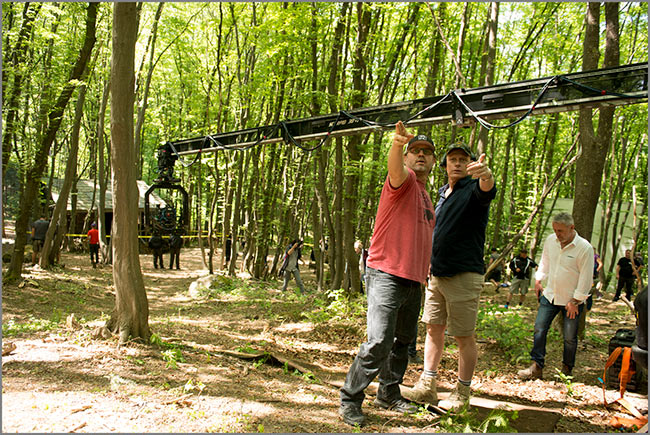 Straight off the bat on the first day of principal photography, production was hit by an extreme weather phenomenon named “The Beast from the East”. A cold weather front from Scandinavia brought blizzards, sleet and rain to the UK, freezing the lake at Virginia Water. The first few days of the boat sequence being shot there had to be cancelled, and with that production had to be transferred onto a stage at Pinewood Studios. O’Loughlin had to adapt swiftly as he was now faced with setting an exterior look on stage before having to go back and do the bulk of the work at Virginia Water once the weather settled.

“I had to adjust very quickly to make this work with blue screen. Ordinarily you would do the location work first then match it on the blue screen stage. This went one step further as there was never any intention to do blue screen work for this sequence. I knew the London weather pretty well, having shot there before, so I backed myself. I wanted a soft, ambient look and thankfully London delivered what I’d anticipated at that time of year – mostly grey skies. In the end the sequence stitched together beautifully.” 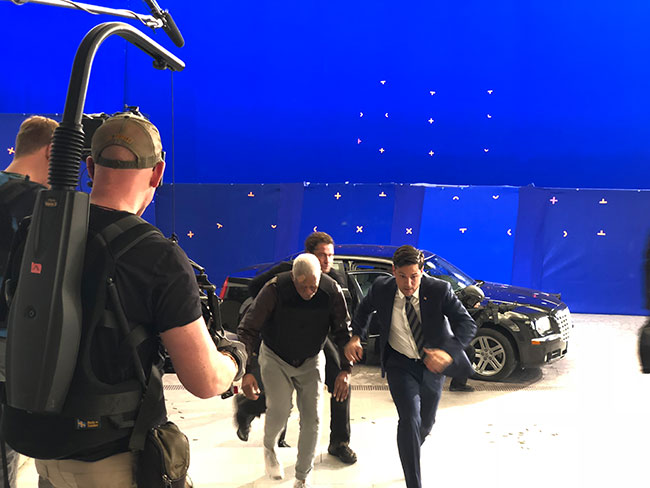 The challenges to the shooting schedule didn’t end with the weather. There were also challenges caused by actor availability. “In the film, there’s a big sequence where the President has to be broken out of a hospital and our heroes are being chased in a limo by the bad guys. They’re ambushed and under heavy fire. They have escaped the car and rush into an office building to gain cover. The exterior location was an office building in Bulgaria, but we couldn’t get Morgan Freeman over there due to his schedule. We ended up doing all of that exterior work for Morgan’s coverage against blue screen on stage at Pinewood Studios two months before the exterior was shot on location in Sofia. Once again I was faced with setting a look on stage before shooting the actual meat of the scene on location. ” 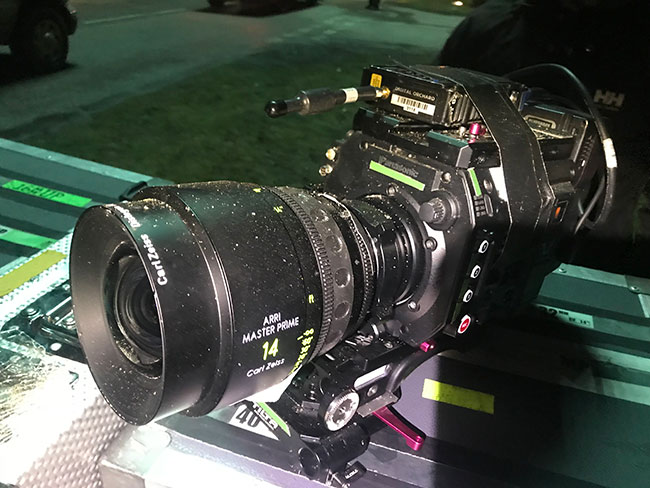 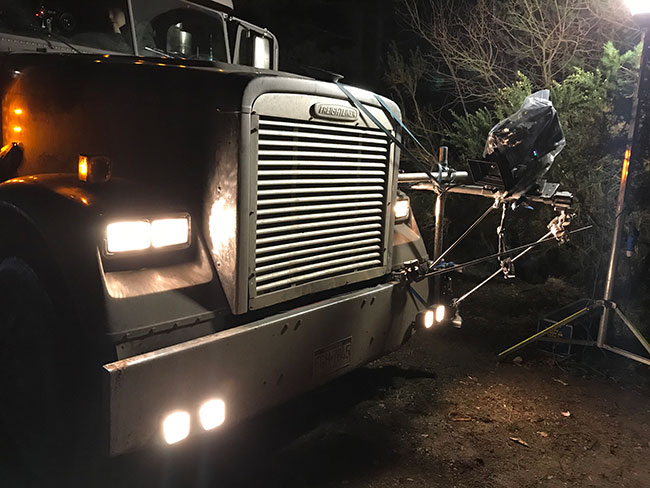 VariCam LT rigged to the side of the hero truck

A number of different cameras were used on Angel Has Fallen, with the main workhorse being Alexa Minis. As a great deal of the major action sequences in the film are shot at night, O’Loughlin needed to find a camera system conducive to the low light environments and complicated stunt sequences that were being executed. He ran several tests using different cameras in their forest location, and ended up opting for the VariCam LT due to its native 5000 ISO setting. “The camera really digs into shadow areas, and was perfectly suited to the way in which we wanted these night sequences to look. We also used an EVA1 maximising on its size, strapping it to the side of our hero vehicles for the chase scenes.”

Describing one of the scenes that he used the VariCam LT he said; “There was a large night scene where Agent Banning is on the run and steals a truck. The cops are chasing him in police cars and police helicopter. We shot this sequence at Longcross Studios in Surrey, UK. We did some testing in pre-production, and decided that we wanted it to look totally realistic and without the use of studio lights. We overhauled the truck’s interior dash lights, its headlights and its marker lights as well as the police vehicle lights. I wanted to use the added sensitivity of the VariCam but not have vehicle lights blown out. We wanted to see detail in the vehicles as well as the light play on the side of the truck”.

Jules added, “The Varicam’s sensitivity also meant that the sky had detail in it – it picked up London’s city lights illuminating the night sky. It was a tricky manipulation of exposure, and in the end the sequence is shot with very few movie lights. “The interior work was completed on a stage at Nu Boyana Studios “Going forward, without doubt, I’d use the VariCam LT for low-light jobs”.

Using a number of different cameras on a project like this can sometimes cause picture matching differences in post-production. This wasn’t Jules’ experience when matching the low-light VariCam LT shots with those from the Arri Alexa Mini. He found that they could be matched well, in creating an outstanding result.

“I’m not a purist in the sense of needing the same set of cameras and lenses throughout the shoot. We used a wide range on Angel Has Fallen. It’s about using the right camera for the right sequence, and when it comes to post-production we have enormous power to match everything up.” Jules concluded.

Jules O’Loughlin was nominated for a 2014 Australian Academy of Cinema and Television Arts Award in the Best Cinematography in Television category for Redfern Now: Dogs of War (2013).  He is known for his work on Angel Has Fallen (2019), See (2019) and Black Sails (2014).