Last weekend the Freshwater Surf Lifesaving and Board Riders Club hosted the annual Duke’s Day festival. The festival honours Duke Kahanamoku – the Hawaiian swimming and surfing hero who came to Australia in 1914/1915 to swim and give the exhibition of ‘surf-riding’ that cemented the sport in our country. 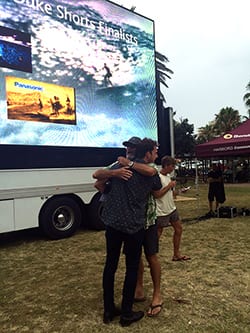 This year’s festival marked the 100th year anniversary of Duke’s amazing gift to Australia with two days of events and exhibitions. An important part of the festival was the Duke’s Shorts Video Exhibition, presented in association with Panasonic and featuring LUMIX ambassador and legendary surf film maker, Jack McCoy.

Duke’s Shorts presented an opportunity for emerging film makers to create a short surf film based around the themes of the surfing community’s respect for the ocean and environment and/or the great Duke Kahanamoku. Finalists had their films shown before Jack McCoy’s critically acclaimed “A Deeper Shade of Blue” and the winner took home a high-end stills/video LUMIX G Series camera.

From a number of excellent entries, the judging panel whittled down the field to three outstanding short films. From this shortlist, the audience voted 1000 Surfboard Graveyard by Chris Anderson as the winning film, netting its creator much glory and a Panasonic LUMIX GH4 camera with 12-35mm F2.8 lens valued at $2999RRP.

An eye-opening piece by environmentalist Chris Anderson where broken surfboards are transformed into art.

Jasmine Muller’s montage of historical footage of the Duke set to a punk song with a hint of The Beach Boys harmony.

A 2 minute animation by Solomon Davey with the Duke gliding in and out of different scenes that got plenty of hoots and laughter from the appreciative audience.