Panasonic Toughpad on board with Australian Sailing’s winning team

The mighty Toughbook FZ-G1 ruggedised tablet supports Australian Sailing’s technicians, coaches and competitors. The high performance team now has its ‘eye on the prize’ for the upcoming Tokyo 2020 Olympics, following its most successful medal haul ever at the Rio 2016 Olympic Games where they finished with three gold and four silver across the talented Olympic and record-breaking Paralympic teams.

Sailing is a complex and sometimes frustrating sport, where the boats may have the most advanced design, but are still at the mercy of what Olympic medalist Lisa Darmanin calls the ‘weather gods’ – the winds, the tides and the currents that can confound the most experienced of athletes. Peter Logan, Senior Performance Analyst, Australian Sailing, has the pivotal responsibility of co-ordinating all the technical services to support the team bid, from meteorology support, to mast and hull testing plus the all -important performance analysis on the water for both boats and athletes. Reviewing videos and images is an important part of this role – and this is now underpinned by bespoke software and rugged hardware that’s unique to the Australian team.

Emmett Lazich’s Toughbook stood up to sun, salt, driving rain and vibration without a hitch.

Australian Sailing’s ‘secret weapon’ in its arsenal has been to harness powerful cutting edge race modelling technology that allows the coaching and sailing team to develop the best possible strategies when training for a particular competition and location. So, on raceday – when athletes must compete without access to these aids – they’re prepared and confident to compete in the most challenging and rapidly changing conditions. In the run up to the Rio 2016 Games, the team used FZ-G1 rugged Toughpads mounted in coaches’ boats and plotting race scenarios – based on the collection and analysis of thousands of hours of course data, including wind, tide and currents combined with the boat and race marker information.

“Selecting the FZ-G1 Toughpad for its robustness and durability was pretty easy. There was nothing else you could reliably use when you had waves crashing over you, and where coaches would occasionally drop the device in the bottom of the boat and hope that it’s still functioning later.”

With the FZ-G1 now on board, Australian Sailing can rely on a suite of capabilities that support ‘technical warfare’ without the risk of failure. The FZ-G1 tablet was built to operate in the extreme conditions the team faced on water – sealed against sea and rain spray, grit and dirt, resistant to heat and cold, with a fully ruggedised body protected against knocks and drops, and a daylight readable screen designed to be seen under direct sunlight. The Toughpad’s robust strength, coupled with the power of a full PC housed in a slim line form factor, means technicians and coaching staff can use a single device that is portable enough to be carried as a handheld tablet on a day to day basis.

“The marine world is extremely harsh, so selecting the FZ-G1 Toughpad for its robustness and durability was pretty easy. There was nothing else you could reliably use when you had waves crashing over you, and where coaches would occasionally drop the device in the bottom of the boat and hope that it’s still functioning later. Equal to that was the environment – generally with the sun beating down on the screen it was impossible to see unless it was daylight readable. Portability was also an important factor for the gear that we selected.”
– Peter Logan, Senior Performance Analyst, Australian Sailing 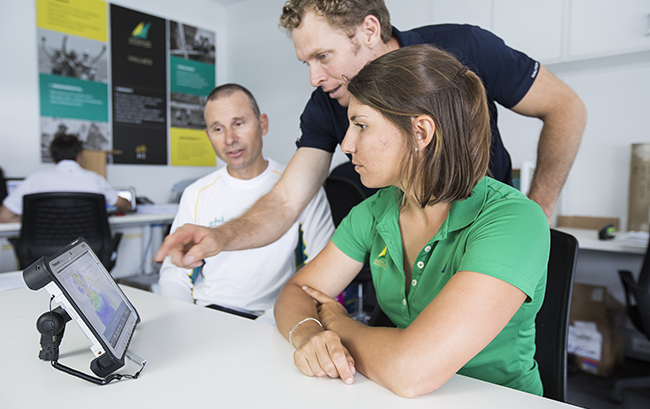 “We learned to trust our data and the Toughpad was the tool to make it possible. Confidence is a huge thing as the Olympics is a mental game.”

It was crucial that the Toughpad could streamline the task of getting teams up to speed with the Rio environment. Under Olympic Games rules, mobile data could be used in the lead-up, but not on competition days. The Toughbook could be accessed on raceday by the athletes, up to 4 minutes before their race began. Previously, the team used some crude ‘rules of thumb’ to estimate wind changes and tides, and the plan would be on laminated A4 with diagrams and arrows. The Rio course was too complicated for that and it was clear the old way wouldn’t cut it. Also, with limited time, using the race modeler increased productivity– for example, what some teams had 20 days to achieve, the Australians had to master in five days. The technology was extremely accurate in its analysis, with the highly visual output on the Toughpad making it straightforward to work on strategy with the athletes.

“As sailors we see the wind and test the course beforehand and create a strategy using our eyes and our skills. In training it was great as we could develop strategies before we went out there based on the technology and then test its reliability. Our coaches would throw us the Toughpad to look at, and the confidence we gained when our experience on the water matched the modelling data was a definite mental advantage. It was good to be able to check on the environment as it evolved throughout the day.”
– Lisa Darmanin, Olympic Medalist, Australian Sailing

There’s little time for the winning team to rest on their laurels. With challenging events ahead in the lead up to qualifying for the next Olympics, the Toughpad is now confirmed as a fundamental part of the crew for Australian Sailing’s Tokyo 2020 bid.