Panasonic has long understood that delivering visual image processing technologies means working side-by-side with the creative filmmaking community. Which is there’s been a Panasonic Hollywood Laboratory in the heart of Los Angeles for more than 20 years, collaborating with everyone from film studios to the THX quality assurance group, along with individual directors, cinematographers and colourists.

The extent of this collaboration has reached new heights with the latest Panasonic consumer television range, and there’s no better example of this than our flagship EZ1000 Master OLED 4K Pro HDR series. The EZ1000 has been certified as Ultra HD Premium and received THX 4K certification thanks to its combination of cutting-edge image processing and next-generation OLED panels, and has been approved for use in post-production studios as client reference monitor by Hollywood giant, Deluxe.

The pro-grade features that make the EZ1000 so valuable to professional content creators also mean consumers have an unprecedented opportunity to genuinely bring Hollywood home. In a recent review for Forbes, tech writer John Archer called it the first TV that truly blurs the boundaries between the sort of megabucks ‘mastering monitors’ studios use to grade films and a TV consumers can buy for their own homes.

Top colourists, image scientists and engineers at Deluxe’s Company 3, EFILM, and Encore post-production companies worked with Panasonic to tune and test the EZ1000 OLED TV. The company’s creative artists consistently contribute to the most acclaimed movies, TV shows and advertising in the industry, including 13 of the films nominated for Academy Awards this year and 50 percent of the commercials that aired during the recent Super Bowl. Deluxe is also a pioneer in HDR, having already mastered more than 16 episodic titles in this brilliant new format.

Deluxe also approved the EZ1000 for use as a client reference monitor for colour grading sessions on blockbuster feature films and high-end television episodics across their facilities. This is a remarkable feat for a consumer TV and a testament to the EZ1000’s incredible 3D Look Up Table colour management, along with its capacity for content creators to upload their own in-house colour tech.

“Colour has a latent power; its ability to evoke emotions that help filmmakers tell stories. If you aren’t seeing colour as it was intended, you aren’t getting the experience that was intended. Until now there hasn’t been an affordable way to present multiple formats consistently in a way that we can approve. The Panasonic [EZ1000] TV is a major breakthrough, delivering consistently with the parameters and characteristics we see on professional-grade monitors that our colourists are referencing.

“We couldn’t be more excited to work with a partner like Panasonic who recognises the seriousness of what we require in terms of colourimetry and has collaborated with us to tune and rigorously test the technology. Since our clients trust us to ensure that consistency of experience we need to be really comfortable. After putting this TV through its paces, we are confident that it does – throughout post-production and right to the consumer.”
– Stefan Sonnenfeld, Chief Creative Officer, Deluxe & Founder of Company 3 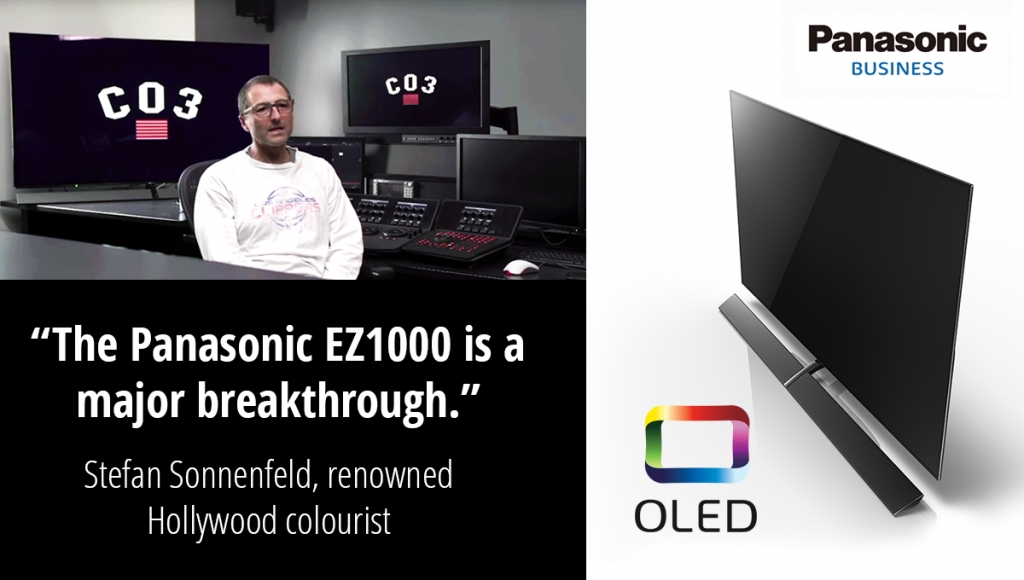 Stefan Sonnenfeld, Founder and President of Company 3 and Chief Creative Officer of Deluxe, is a trusted collaborator of some of the world’s best filmmakers. Described by NPR as a “da Vinci of the movies,” Sonnenfeld has applied his skills as a colourist to many of the most acclaimed and popular features of the past decade: The Magnificent Seven, Beauty and the Beast, Deepwater Horizon, Star Wars: The Force Awakens, the Pirates of the Caribbean series, Wonder Woman, and Justice League, to name a few.

WATCH: Hollywood to Your Home

Shot on the Panasonic VariCam 35 camera and produced exclusively for Panasonic 4K Pro HDR OLED TVs, which are designed from the bottom up and tuned in Hollywood to deliver picture quality that is true to the filmmaker’s vision!