Tokai shines as clouds roll in 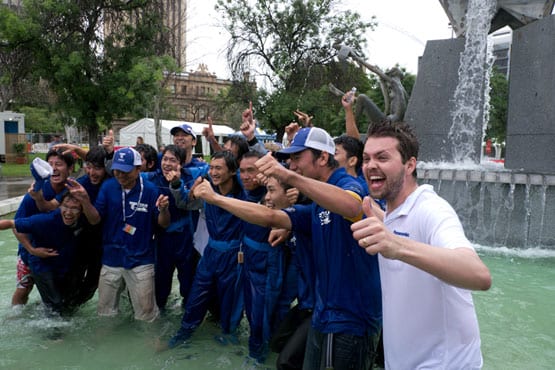 This year’s race started on October 16, 2011. Although the Tokai University team started at the qualifying position of fifth place, from the start, the team took the lead and continually increased its margin throughout the entire race.

The jubilant team and support crew celebrated at the finish line in Angle Vale before making their way to the official ceremony in Adelaide’s Victoria Square. Champagne flowed and the traditional fountain dunking entertained the waiting crowds.

In one of the closest contests in the event’s history the gallant Nuon team from the Netherlands gave it all they had. The two teams shared the final checkpoint in Port Augusta just minutes apart. But as the sun faded and the clouds rolled in it became clear the Dutch team and their vehicle Nuna 6 were not going to catch the Japanese team and had to be content with second across the line. They arrived in Angle Vale at 2.12 pm Darwin time in a time of 33.5 hours with an average speed of 88.62 kilometres per hour.

The American Solar Champions, the team from Michigan University, continued their recent tradition of crossing the line 3rd reaching Angle Vale at 3.55 pm, in 35 hours and 33 minutes with an average speed of 84.33 kilometres.

Note 1: As a mass-produced, residential solar power generation system, based on Panasonic’s survey; as of March 2011.