Panasonic is pleased to announce our Clear Glass 40W LED Bulb, which has been recognised with an iF Gold Award for the second year running, the highest accolade possible from the iF International Forum Design. Known as the ‘Modern Classic’ in Europe, last year the 20W model received this prestigious honour. 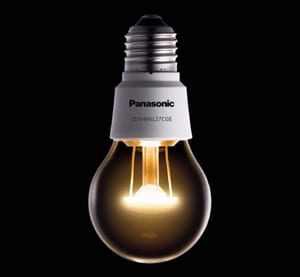 The iF Design Awards attracted 4,352 entries from 51 countries, with 1,410 entries receiving an award and only 75 picking up the coveted Gold Award.

The Clear Glass 40W LED Bulb features many similar design elements as the highly praised 20W, including similarities in sizes, shape, position of light source, light colour, light distribution to a clear type incandescent bulb, made possible through our unique light diffusion and heat dissipation technology. Shaped like an incandescent bulb and with a brightness equivalent to a 40W incandescent, you can easily switch to LED bulbs and enjoy a significant reduction in energy used.

As well as the Clear Glass 40W LED Bulb, 17 other products from Panasonic, including an air-conditioner, wiring device, digital high-definition television and digital still camera, were awarded the iF Product Design Award.