Griffin Hammond is a documentary filmmaker in New York City, covering politics for Bloomberg Television. He filmed his award-winning documentary Sriracha on the LUMIX GH3, and captured the drama of the U.S. presidential election on his LUMIX GH4. Griffin’s work has been screened on ABC, CBS, NBC, CNN, MSNBC, Fox News, and Showtime.

The Story of Hand Cut by Griffin Hammond, Documentary Filmmaker

“To capture all of this fine detail with minimal motion blur, I need a higher framerate. 60p recording captures twice as much information, reducing judder in my pans and jib shots. And with double the shutter speed, each frame is clearer. Whether played back at full speed or in slow motion, 4K 60p lets me immerse my audience in much more visual detail. The LUMIX GH5 is the perfect camera for this film.”
Watch the behind the scenes on YouTube
“Keeping all the great features I’ve relied on with my LUMIX GH4—like focus peaking and time lapse—the addition of in-body image stabilisation 5-axis Dual I.S. 2 to the LUMIX GH5 a game changer. My favourite prime lenses without O.I.S. no longer jitter in handheld shots!”
“I’m really pleased with the image detail off the camera, using the built-in colour profiles, especially in 4K 60p. And because I prefer wide shots, I love that 4K now captures the full sensor size. As a documentary filmmaker, I appreciate that the LUMIX GH5 retains an unobtrusive, compact size, while managing to add full-size HDMI and dual SD card slots.” 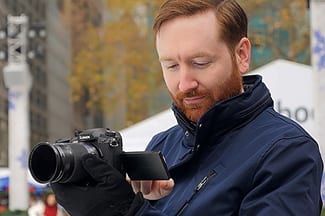 About the LUMIX GH5