Frances Mocnik’s work has been shown internationally, including recent exhibitions in St.Petersburg, Russia. She is also a regular contributor to the Australian Geographic Journal. She has been awarded the Royal Australian Geographic Medal for the Pursuit of Excellence in Photography and her series the Night that Follows Day, has seen her nominated for the prestigious Walkley award and the Leica Documentary award.
The following is Frances’ thirteen day journey to capture the beauty throughout South Australia in Adelaide, the Flinders Rangers, Kangaroo Island and the Remarkables, using a Lumix DMC -GF1 and DMC-TZ7.

Day One : Sydney to Adelaide
The forecast said rain but instead we flew through a sky dotted with cotton wool like clouds.

It’s amazing what you can shoot from a plane window. For a clear shot try pressing the lens of your camera flush against the glass. This eliminates reflections from inside the cabin and gives you a better chance at a clean shot.

Headed south to Cape Jervis and onto the car ferry; next stop Kangaroo Island. If you’re on a free form journey this is one thing you will need to book. The ferry fills up quickly so standby is not really an option plus there’s a discount if you book online. www.sealink.com.au

Day Two : Remarkable Rocks, Flinders National Park, and Kangaroo Island.
Arrived to find the rocks completely obscured by a curtain of rain. Tried to walk down and around the site but the strong winds made standing on the slippery rock surface impossible.

Changed plans and headed to the somewhat sheltered Vivonne Bay. Once voted the best Australian beach in SA I was keen, despite the rain, to take a look. The rain continued and the landscape reminded me of an Impressionist’s painting. I headed down to try and capture this feeling in camera. With the Lumix GF1 mounted on a tripod I set the focus to manual and exposed using Aperture Priority mode. 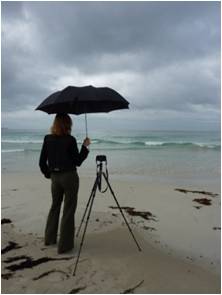 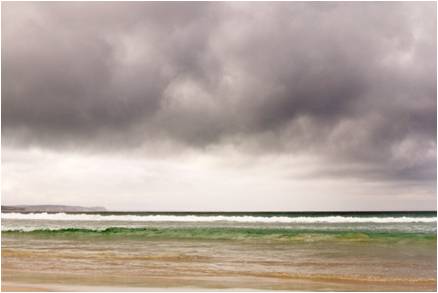 Day Three: Returning to the Remarkable Rocks
It is still raining and I’m on my way back to the Remarkable Rocks. I’m going to have to work with whatever the weather offers. I am hoping for small windows of opportunity, just a couple of minutes here and there without rain or fierce wind. It poured down and I took refuge in this small cave. I thought the scene still worth shooting, I might never return to this location so whatever I could get would be a good documentation of my time there. To emphasise the rain I waited for a few drops to hit the lens before shooting. Don’t wait for perfect weather, blue sky can be boring; capture the emotion and elements that are unique to your experience. 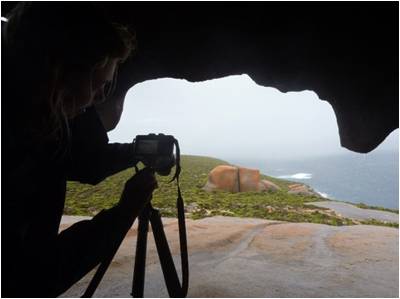 If you’re planning to photograph the Remarkables consider staying on the West side of the island. The Kangaroo Island Wilderness Retreat is the closest accommodation to the Flinders Chase National Park and given the 154 km drive between the ferry and the park it will save you a lot of travel time.

Day Four: Departed Kangaroo Island with a view to reaching Port Pirie by nightfall.
It’s a day of driving, picking up provisions and getting to our next location. I am hoping for some good driving shots along the way to illustrate all the time I’m spending on the road. I really enjoy the challenge of shooting in a confined space; it’s a good exercise in composition. 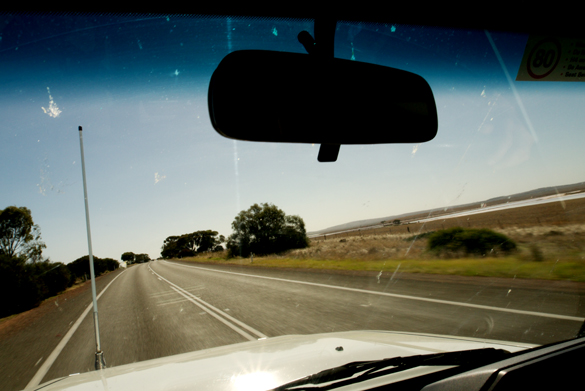 Day Five: Departed Port Pirie for Stokes Hill
Reached Stokes Hill Lookout in time to catch a vibrant sunset. The sun was setting fast, no time to dig out the tripod, so I shot handheld. 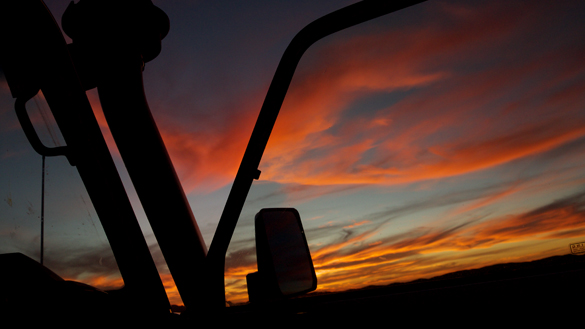 Day Six: Arkaba Homestead
Swapped the open road for a bit of bush luxury. I’ve been travelling and photographing Australia for the past 10 years and life in the bush is changing. It’s no longer all dust, dirt and heat. I wanted to illustrate this change and chose Arkaba Homestead in which to create an image that spoke of the emerging trend of luxury bush travel. In this shot the silhouetted Elba ranges hover over a perfectly set table enticing guests to dinner. If you’ve on a road trip through the Flinders add a touch of luxury to your bush experience with a night or two at the Arkaba Homestead 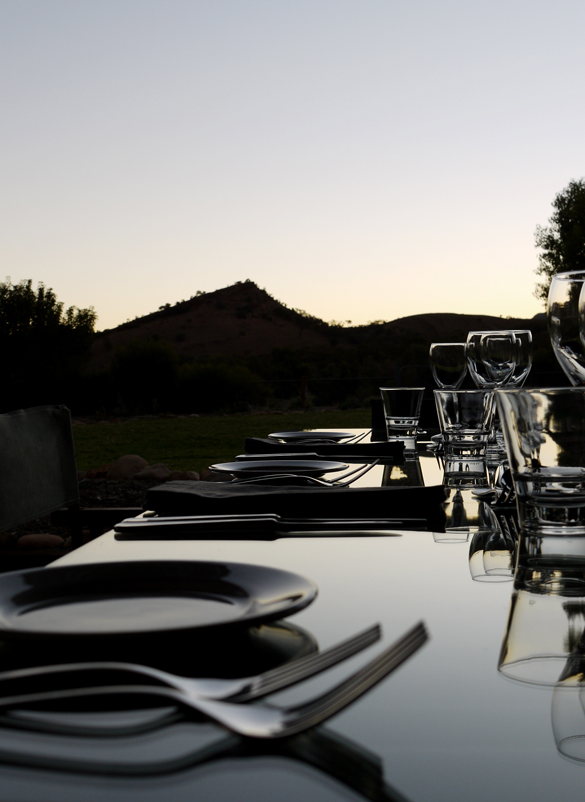 Day Seven: Past Rawnsley’s Lookout to Flinders
Up early and winding my way along the highway just beyond Rawnsley’s lookout, at this hour the Flinders are a flat orange colour with no textural detail; just great shape. The Lumix GF1 has a format option that allows me to shoot square; I love this format.

Day Eight: Rawnsley Lookout
Recent rains have closed many of the dirt roads through the Finders Ranges so I head up to the easily accessible Rawnsley Lookout. I had just framed my shot when a busload of Japanese tourists arrived. Spilling out of their van they walked straight into shot and stood like strange human flora amongst the tall fonds of the Xanthorrhoea. I like the narrative they create. 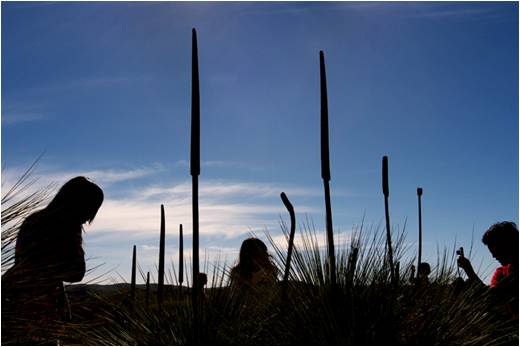 Day Nine: Heading toward the coast. 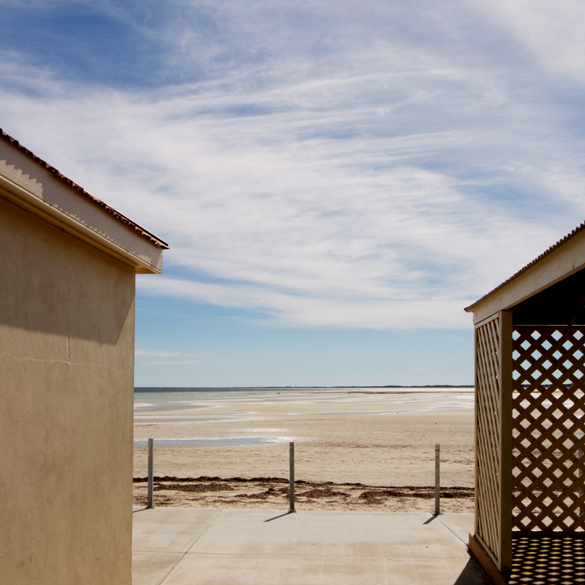 Day Ten: Carrying on down the coast
This is one of my absolute favourite shots. I caught a glimpse of this scene from the road but drove a further two kilometres before deciding to turn back; glad I did. These patiently sleeping caravans convey in one frame a very universal Australian coastal experience.

Day Eleven: On the way to Burra
Turned inland with a view to reaching Burra. The blues hues of the ocean landscape were quickly replaced by the dry ashen tones of the interior. Along the Farrell Flat Rd, somewhere near Hill River, smoke plumed into the sky mixing with wispy cloud and I stopped for this shot. 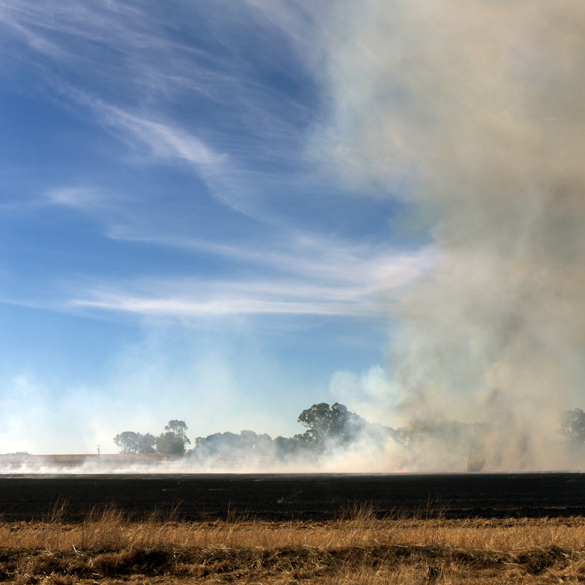 An hour down the road the warm light of late afternoon started to kick in washing the scene with a beautiful orange hue, there wasn’t near anything ‘remarkable’ around but regardless I stopped the car and this beautiful image formed in a field that initially looked like nothing.

Watch the light and be inspired by how it changes. If the light is looking amazing just stop and make a shot where ever you are, It’ll be a great reminder of your adventures and certainly more intimate and evocative than shooting well documented areas.

Day Twelve: Heading north along the coast road
Headed against the flow of city traffic then hugged the coast road north. It was the proverbial picture perfect postcard day. It got me thinking about the great pleasures of living on the Australian coast, cloudless skies, the promise of lazy days, a cold drink in the refuge of deep dark shade; the West Beach Surf Life Saving Club delivered all this in one shot.

Day Thirteen: Sunset at Glenelg Pier
Living in Sydney I don’t see the sun set over the ocean and for my last night in South Australia I headed to Glenelg Pier to watch just this. A gaggle of camera toting tourists farewelled the setting sun with their orchestra of clacking camera shutters. As soon as the sun dropped below the horizon everyone left. What about the afterglow? It’s the best part of a sunset! I shot the two images below a good 25 minutes after sundown. These orange and black graphic shots rank in my top 10 from this trip but I’m still undecided which of the two I prefer. 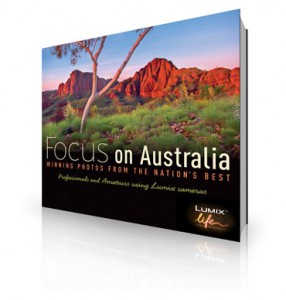 Lumix Life: Focus on Australia is Panasonic’s latest project for Australian LUMIX photographers, giving them the opportunity to submit their images capturing the heart and soul of Australia in a rich online gallery. Professional photographers from around the nations, including Frances Mocnik, are also actively contributing their own shots in what will culminate in a professionally published book combining photos from both experts and selected public entries. The book will be available in stores throughout the country will all proceeds going to charity.