Panasonic Corporation, the Official Worldwide Olympic Partner in the Audio and Visual Equipment category, the International Olympic Committee (IOC) and Olympic Broadcasting Services (OBS) announced today their partnership agreement to make the London 2012 Olympic Games the first ever live 3D Olympic Games. The partnership will produce the first HD 3D live broadcast in Olympic history, and will allow audiences around the globe to witness the world’s greatest sporting event in immersive 3D.

The 3D broadcast will include major events such as the Opening and Closing Ceremonies, athletics, gymnastics, diving and swimming, and will be produced and delivered to participating rights-holding broadcasters around the world. OBS will be in charge of producing more than 200 hours of 3D coverage during the London 2012 Olympic Games by utilizing Panasonic’s state-of-art 3D production technologies including the AG-3DP1, a P2HD professional fully-integrated twin-lens Full HD 3D camera recorder.

“The Olympic Games has always been a pioneer in the development of TV broadcasting technologies, and has been on the cusp of innovation since the first live over-the-air broadcast was introduced in London 1948.” 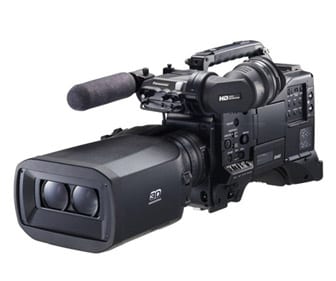 “Panasonic has been proud to support the Olympic Host Broadcaster since the first digital broadcast in Barcelona 1992, right through to the first HD broadcast in Beijing 2008. Now we are proud to announce the partnership with the IOC and OBS to create another successful era in Olympic broadcasting with the first live 3D Olympic Games at London 2012. There is no doubt that the Olympic Games will provide some of the best content for the 3D market in the future, and that 3D TV will drastically change the way we experience this great sporting event in our living rooms,” said Takumi Kajisha, Managing Executive Officer of Panasonic.

“For the past two decades, Panasonic has been a valued partner of the Olympic Movement and of the Host Broadcasting organisation,” said Manolo Romero, Managing Director of OBS. “We are now proud to announce this partnership to realize the first ever live 3D Olympic Games, and we are confident that this unprecedented broadcast will be a great success in no small part due to the 3D technologies provided by Panasonic. Ultimately, we believe this production of the first live 3D Olympic Games will make the London 2012 Olympic Games one of the most significant in the history of broadcasting technology.” 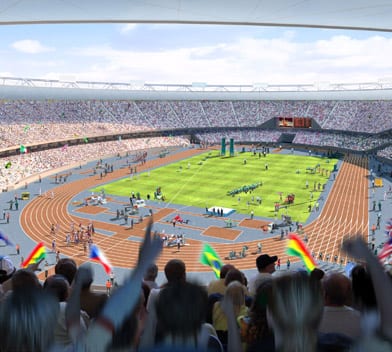 In the spirit of the Panasonic Olympic slogan “Sharing the Passion”, Panasonic is not only making it possible for broadcasters and people around the world to share in the excitement of the Olympic Games through this 3D broadcast, but also through its state-of-the-art digital AV equipment technologies ranging from professional broadcast systems to consumer products such as Full HD 3D TVs, 3D Blu-ray Disc players, and home entertainment systems.

Panasonic is proud to support the Olympic Movement – aimed at promoting world peace through sports – as an Official Worldwide Olympic Partner in the Audio and Visual Equipment category for more than 20 years since The Olympic Partner (TOP) Program commenced for the Calgary Olympic Winter Games in 1988. Under the slogan of “Sharing the Passion,” Panasonic will contribute to the success of the Olympic Games through its technology. In 2007 Panasonic renewed the partnership with the International Olympic Committee through to the 2016 Olympic Games in Rio de Janeiro.

——————–
NOTE TO AUSTRALIAN FANS:
The 3D broadcast of the London 2012 Olympic Games in Australia has not been announced at this stage. Further information will be released as it becomes available.
——————–