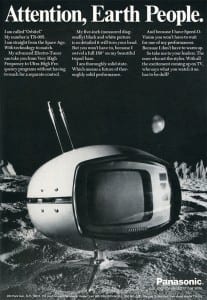 One of the most iconic television sets of the 20th century, the Panasonic TR-005 Orbitel spoke to a generation obsessed by the concept of outer space. Manufactured for a very short period from the late 1960’s into the very early 1970’s, the Orbitel was billed as being “straight from the Space Age with technology to match.”

In addition to just being ridiculously cute, the Orbitel had one heck of an ad campaign (TV on the moon, anyone) and really high-tech features. It swiveled a full 180-degrees its tripod base, had super-cool antennae and really just was the perfect addition to any swingin’ 60’s bad. Oh yeah, and typical of a Panasonic TV, this baby had a very long lifespan. In fact, collectors are still buying and selling the Orbitel and boasting about how well the set is still working!