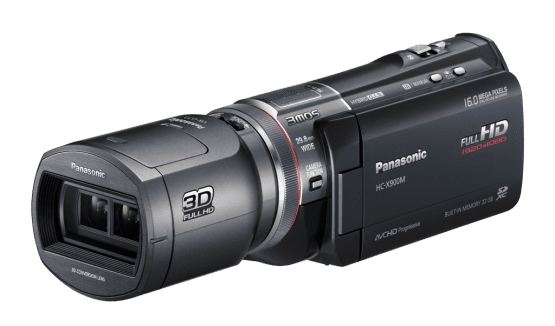 For those looking to explore the third dimension in video, the HC-X900M camcorder can also shoot Full HD 3D with the new optional 3D conversion lens. This lens is smaller than its predecessor and boasts an increased brightness to F2.4 as well as 1.5x digital zooming. The camcorder also offers 2D to 3D conversion and the ability to view 3D via the LCD screen as you shoot.

Thanks to the advanced 3MOS sensor’s unique pixel shift technology that runs at high speed and with superb accuracy, the HC-X900M further reduces noise by 40 per cent when compared to last year’s HDC-SD900.

With an Octagon Iris Diaphragm, the user can apply a defocusing effect, so it is possible to shoot at a close distance from the subject while fitting both the subject and the surrounding area into the frame.

In addition to the HYBRID O.I.S. + system, the HC-X900M provides even more powerful stabilisation correction with O.I.S. Lock. By pressing the O.I.S. Lock button on the LCD monitor, the blur detection sensitivity is maximised and camera movements are detected and corrected without image degradation.

Creative flexibility and ease of use

The HC-X900M features a manual ring for easy and convenient fingertip-control of commonly-used settings, including focus, zoom, exposure, shutter speed and white balance. Intuitive touch operation enables extremely easy control on the LCD. The Touch Zoom function allows the user to simply touch the LCD to activate slow zooming. The LCD also supports Touch Shutter, which automatically focuses and takes a still photo when the user touches the subject on the screen.

Vivid and immersive Full HD 3D content can be created with Panasonic’s optional VW-CLT2 3D conversion lens mounted to the camcorder. Simply connect the camcorder to a compatible 3DTV to view your 3D movies at home.

The HC-X900M is equipped with a 1,150,000-dot 3.5-inch LCD that allows 3D viewing without the need for special eyewear, so 3D images can be viewed immediately.  The display can be switched between 2D and 3D. Even without mounting the conversion lens, images shot in 2D can be converted to 3D thanks to the new 2D to 3D Conversion function.

The camcorder is supplied with HD Writer AE 4.1 PC editing software for 2D and 3D editing (Windows OS).  Import your recorded 3D footage to your PC via SD Card slot or HDMI cable.  3D footage can be viewed or edited on your PC and archived to SD Card, or Blu-ray disc. The software allows easy uploading of video clips to YouTube™ and Facebook©, so even inexperienced users can post video clips on the web.Also, the ordinarily time-consuming task of converting and archiving data from 50p to AVCHD or MPEG-2 format can be easily done at high speed by connecting the 3MOS camcorder to a PC with a USB cable and using the Conversion Assist function.