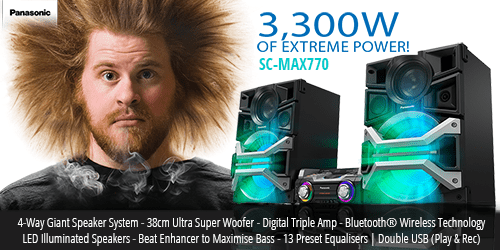 Last week, Tess Bennett from Appliance Retailer reported that the beloved boom box of the 70s and 80s is experiencing a high-tech revival thanks to the booming Bluetooth speaker market.

“Also known as a ghetto blaster, the portable music player was introduced to the US market in the mid-70s and occupied a prominent position in pop culture throughout the 80s,” Tess wrote.

“The 1990s saw the decline of the boom box partly due to the rise of the Walkman and other portable music players that eliminated the need to carry the bulky sound system and lead to headphones becoming an essential item of consumer tech.”

“We’re seeing an increase in demand for music streaming and Bluetooth systems. We’re seeing demand for party systems, which in Australia has been hugely successful for us: there is nothing like it,” Paul said.

This is great news for the Panasonic Mini System MAX770, one of the flagship products from our 2014 audio range , and featured as an example of this trend.