Shooting Aurora in the Arctic with Ewen Bell 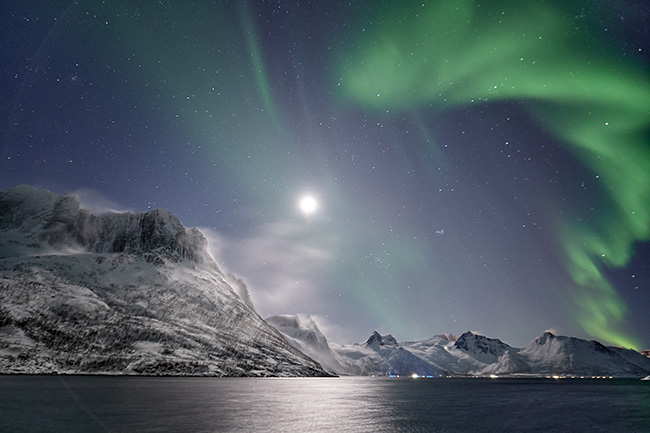 Photographing the Northern lights is high on the bucket list for many landscape and astro photographers. So when LUMIX Pro photographer Ewen Bell offered to recount his photo tour to Norway and share some tips for shooting aurora in the Arctic, we were more than happy to experience it through his eyes and words.

Aurora photography in the Arctic is unlike most astrophotography, in that you have a lot more light to play with but you also need a very wide lens to rein in the scene.

On a pitch black night even the most modest aurora will make itself evident on a slow exposure. A decent tripod and 10 second exposures will get you into the game. The faster your lens the more you can lower the ISO. Some evenings the Northern Lights will shine so bright they paint in the landscape, casting an eerie green hue across the snow and water. The highest level events switch from green to purple, producing an even more surreal result that looks more like photoshop than photography. Nature is stranger than art sometimes.

The faster your lens and the higher your ISO, the shorter your exposures can be. That’s important for fast moving aurora events, where the ribbons cascade across the horizon, or a corona showers down from over your head. If you can get down to a 2 second exposure you start capturing finer detail in the midst of the aurora chaos. This makes for ever more pleasing time-lapse photography, and an opportunity to capture the motion of these spectacular events as they unfold. Northern Lights are anything but static after all.

The next problem is scale. I’ve seen auroras dancing across 180 degrees of the horizon, at the same time. They can start right above your head and seconds later move from one horizon to the other. Even a 14mm lens is not going to capture it all when a big show is going off. The wider the lens you have the more opportunity there is to connect the landscape to the sky above. Most of the shot is sky, that’s where the action is, but a decent amount of landscape is key to set the context. If you have a reflection on a river or beach, then all the better. Aurora photography is not just about light, it’s about composition too.

A decent 14mm lens at f/2.8 will give you a lot to work with; wide enough to go big on composition but fast enough to reduce your exposure times to the minimum. Any faster than f/2.8 and it gets tricky to grab focus reliably in the dark! Small errors have big consequences when shooting at f/2 or faster.

The LUMIX S1H offers one extra advantage, as I found out while travelling through Arctic Norway on one of my photo tours. Dual Native ISO means the camera can switch to a higher ISO circuit that offers less noise compared to pushing the gain on a conventional low ISO sensor. The result is 24MP of cleaner captures, with the option to push the ISO further and reduce exposure times.

On the island of Senja I watched a massive aurora event unfold. My group had enjoyed a hearty dinner and we decided to drive down the road to a scenic location and wait for the Northern Lights. We packed hot chocolate and some cake in the vans, and headed onto the jetty to setup the tripods. As we arrived the lights began to dance. Just a little at first, but you could feel the moment. Things were going off. I plonked my S1H into position, triggered the time-lapse mode, and spent the next 30 minutes dashing between the group to help people configure their cameras and gear and capture a few moments of delight.

The moonlight was a feature on this particular evening. The human eye sees black on such nights, but a slow exposure on your camera will see blue. Moonlight is my favourite addition to aurora photography because it imbues the green hues with extra vibrance, while painting in the landscape as well. By making the most of the dynamic range of the sensor the brightness of moon can happily appear side by side with the stars. The result is harmonious and rich in detail. 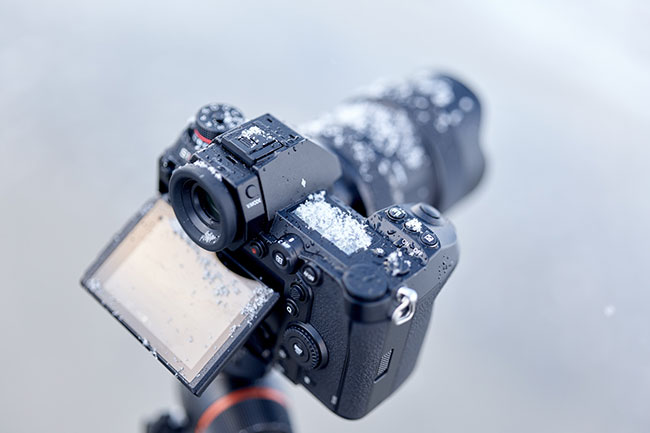 A good lens is the key to aurora photography. I’ve done a lot of night photography in the Arctic with my LUMIX G9 as well. I have a very modest 7.5mm f/2 lens by Laowa that is manual focus and easy to drive in the dark. I love travelling with the G9 and even at -10 degrees outside I’ve been able to set the time-lapse going and capture aurora events, from the comfort of my cabin while enjoying a hot chocolate by the fire. I get over 2 hours of captures on a single battery, so often I just go to bed and check the images the next morning.

Aurora photography is a joy, but it has a habit of interrupting your sleep cycle 🙂