Photo Review has turned the spotlight on the Panasonic Lumix DMC-GH3 camera, and the Lumix lenses G X Vario 12-35mm f/2.8 ASPH and G X Vario 35-100mm f/2.8. The reviewer was so impressed they were named as Editor’s Choice.

The DMC-GH3, as noted in the review, is the third model in the flagship series of interchangeable lens cameras with a focus on providing a wide variety of functions for shooting video. Although the review recognises that there is more to the GH3 than its video capabilities, the reviewer believes the main reason photographers will be drawn to it are for its distinctly superior video capabilities, making it a serious movie production tool.

Features called out include the fully diecast magnesium-alloy frame which makes the camera body the toughest, most durable G-series model to date. The sensor has been upgraded to a new chip with 16.05 megapixels for a wider dynamic range while the contrast-based autofocusing system has been revamped for a very fast response time of 70 milliseconds with the 12-35mm lens.

Meanwhile, an upgraded monitor, continuous shooting at 6 frames/second, a redesigned user interface with five programmable function buttons, new modes for HDR and multiple-exposure photography, and built-in GPS all add to the appeal of this feature-rich camera.

The review highlights the fine-tuning of the camera to serve as a professional-standard video camera, and also mentions the camera being “well-endowed with ‘creative’ controls”, including colour profiles and filters. It goes on to say, “It was difficult not to be impressed with the sharpness and colour accuracy of the test shots we took with the GH3 and the two lenses supplied with the camera.”

The reviewer recommends the GH3 for photographers who want a relatively compact camera system that includes professional standard video capabilities, superior performance and versatility when shooting stills, fast autofocusing for shooting stills and movies, and for photographers who would like built-in Wi-Fi and GPS capabilities. The GH3 is awarded a very impressive overall score of 8.8.

The G X Vario 12-35mm f/2.8 ASPH was “a pleasure to use on the GH3 body and its maximum f/2.8 aperture made shooting in very low light levels easy and satisfying. Combined with fast and accurate autofocusing and the sophisticated stabilisation system, this lens makes a superb partner for the GH3 for photographers interested in pushing the limits of low light shooting.”

The G X VARIO 35-100mm f/2.8 / POWER O.I.S., on the other hand, delivers “fast and accurate autofocusing combined with the f/2.8  maximum aperture and the sophisticated stabilisation system [to] make this lens an excellent partner for the GH3, particularly for photographers interested in low light shooting.”

Both lenses score a very solid 8.5 and combined with the GH3 are essentials in any serious photographer’s equipment arsenal. 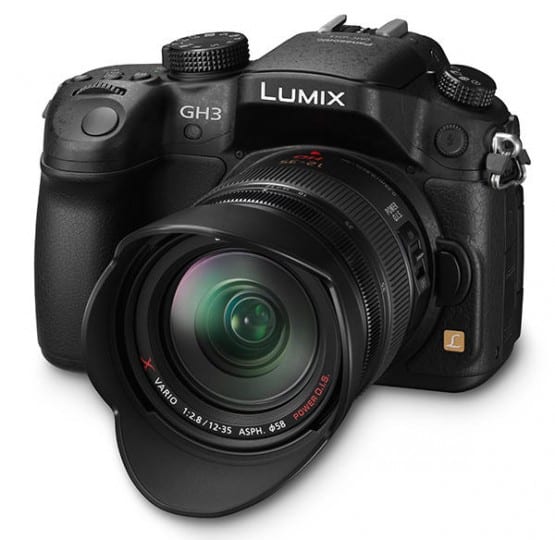 Read the full review for the Lumix DMC-GH3 here.