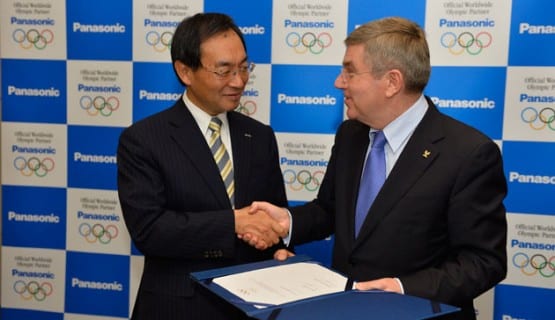 Panasonic is committed to “Sharing the Passion” of athletes with people around the world and connecting people who are passionate about sports and the Olympic Games. Under these grounds, we’re proud to announce the extension of our Official Worldwide Olympic Partnership agreement for a further eight years through to the 2024 Olympic Games.

What that means is that we will continue to provide cutting-edge technologies and products to support the PyeongChang 2018 Olympic Winter Games, the Tokyo 2020 Olympic Games, and the summer and winter Olympic Games to be held in 2022 and 2024 – in addition to the Rio de Janeiro Olympic Games in 2016.

“Panasonic was one of the founding members of our global sponsorship programme, and is the first Partner to commit to continue their global sponsorship through to 2024. This is a clear demonstration of Panasonic’s continuing belief in the Olympic values and the company’s global commitment to the Olympic Movement.” – IOC President Thomas Bach during the signing ceremony.

Panasonic has been TOP sponsor as the Official Olympic Games Audio and Video partner since the program was first introduced at the Calgary Olympic Winter Games, in 1988, in accord to the spirit of the Olympic Movement that aims to realize the world peace. Every games, we supply a large amount of equipment to the competition venues and the Olympic related facilities in a variety of AV product areas, including LED large screen displays, audio systems, broadcasting equipment, projectors, VIERA TVs, HD visual communication equipment and security cameras.