Lumix GH2 captures the spirit of the Seven Ghosts

When the Rip Curl elite ‘Searcher’ crew got news through the grapevine of a remote Indonesian tidal river bore that would be turning out its best waves in 19 years – they knew they had to head over there to experience it for themselves. And when they came face-to-face with the legendary Seven Ghosts, they weren’t disappointed.

A 15-man crew, led by surfers Dean Brady, Bruno Santos, Tyler Larronde, Oney Anwar, and original Searcher Tom Curren, set out to ride some of the craziest and most unique waves on the planet. 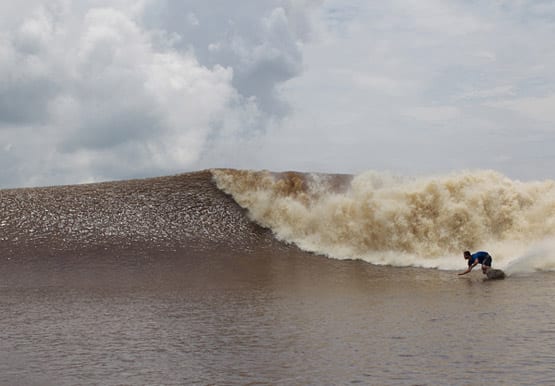 Armed with Panasonic Lumix GH2 cameras, a team of world-renowned surf photographers and filmers got in amongst these freaks of nature and captured this incredible footage.

Check out the video from the Rip Curl Tip2Tip site for yourself here and “witness the greatest river bore tubes ever surfed.”

Episode 3 – Seven Ghosts – Is It True

In this episode of the Seven Ghost video series ‘The Bono’! The surfer crew describe their amazing experience surfing the river waves & momentous barrels, and capture the footage on The Lumix GH2 Camera.

In terms of ‘doing it tough’ with cameras – getting in amongst these otherworldly chocolate brown barrels is about as extreme as it gets. The stunning results that you can check out for yourself above show that the Lumix really delivered when it mattered.

This is the first & second of a series of three Rip Curl “Seven Ghosts” episodes we’ll be featuring on this blog. There’s more unbelievable footage to come next week from what original ‘Searcher’ Tom Curren describes as “the most amazing Search trip in 20 years…”

Make sure you catch it.

Related Links:
Visit the Panasonic website to find out more about the Lumix GH2 Camera