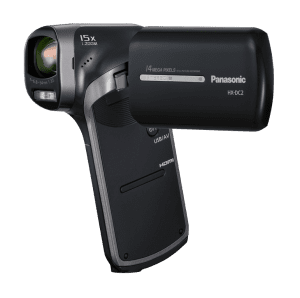 The HX-DC2 and HX-WA2 camcorders combine a fun, appealing style and easy-to-use vertical design with quality imaging and versatile shooting features. In addition, the HX-WA2 is waterproof down to three metres, making it ideal for shooting footage outdoors and underwater.

The design of both camcorders makes it easy to shoot with just one hand, and the controls have been redesigned to allow for even simpler operation. A joystick can now be found on the back of the camcorder to control the menu, and the original twin shutter buttons are now larger making it even easier to flick between taking photos and video footage with your thumb. 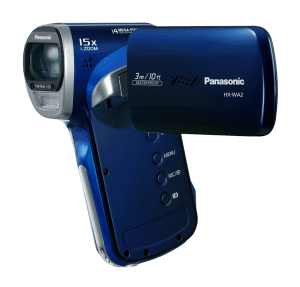 Designed with the active social networker in mind, the HX-WA2 and HX-DC2 camcorders make it easy to capture and share content. The new camcorders record in the MPEG-4 AVC file format for easy file transfer so users can upload to social networking platforms – such as YouTube™ and Facebook© – in an instant.

Users can also record videos using iFrame, ideal for both Mac and PC users. Other convenient connectivity features include a SD memory card slot and a micro HDMI port allowing playback from a Full HD TV.

The HD Writer VE 2.0 software features a “Smart Wizard” that automatically runs when the camcorder is plugged to a PC via a USB port, prompting users to follow a simple, onscreen guide to upload content to a PC or burn to a DVD with ease.

Advanced editing features also allow users to select their favourite songs as background music, add various effects and transitions and even apply Photo Retouch. With the new Short Movie Story feature, users can transform a series of still images into a dramatic short film. Once the image data, theme and background music are selected, the camera takes over to finish the story, which can be saved in HD quality and shared online easily.