We bet you didn’t know that in 1987 George Lucas pimped out Star Wars in a series of Panasonic TV commercials, in-store posters, special events and magazine advertising to celebrate the films 10 year anniversary – but solely in Japan!

The TV commercials are particularly fabulous, in a kitschy and slightly incomprehensible way. Filmed in America, these commercials were a top-secret affair and intended only for the Japanese Star Wars Audience. The entire campaign was so successful that it won a swathe of Japanese advertising awards, thrusting Panasonic into the limelight and developing a whole new yoputh audience for the brand, not to mention cementing an enormous Japanese fan-base for the Star Wars universe.

“George Lucas. The man who directed and produced Star Wars. Combining electronics of high technology and the imagination, a great man who became the genius that created a cinematic world bursting with love and romance. To the people, he is the sorcerer of the big screen. With a strong sense of history and tradition, he is a man who will lead us into the future. Alongside George Lucas, Matsushita Electric brings you its latest concept of “Human Electronics,” an impressive world of audio, visual and computer technology. Gear yourself towards magnificent picture quality and a galaxy of sound. Count on Matsushita Electric to bring you Always Something New.” – Advertising caption in Japanese magazine “Weekly Playboy”

The meeting prior to filming: Lucas, the head of operations, and the Osaka Dentsu staff. 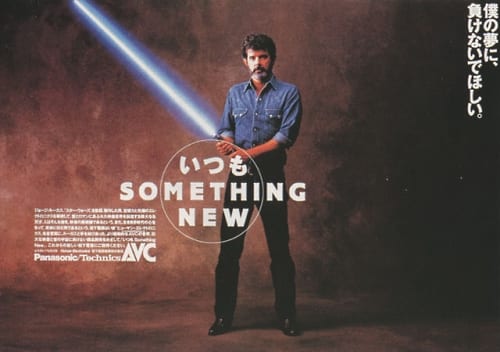 One of the posters for the Japanese campaign. 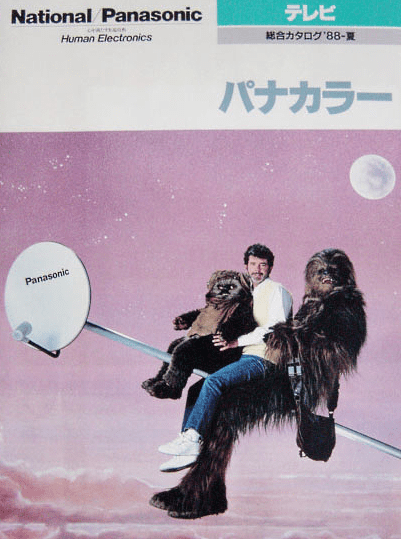 Read more about the campaign.