Calling all budding film makers – you could win a GH4 camera and lens valued at $2999! 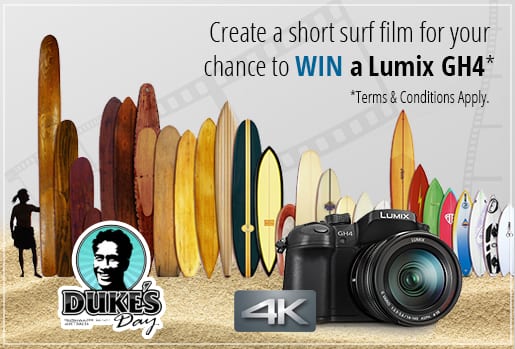 Enter your high res QuickTime file of your film before December 10, 2014.

The annual Duke’s Day festival hosted by the Freshwater Surf Lifesaving and Board Riders Club celebrates the Freshwater community’s love and respect for the ocean. It also honours the almost mythical Hawaiian swimming and surfing hero, Duke Kahanamoku, who came to Australia in 1914/1915 to swim and gave the exhibition of ‘surf-riding’ that cemented the sport in our country – a sport that is now a part of our blood.

This year’s Dukes Day will celebrate the 100th year anniversary of Duke’s amazing gift to Australia with two days of events and exhibitions at Freshwater from the 8-10th of January, 2015.

Duke Day is celebrated on the anniversary of the father of surfing in Australia – Duke Kahanamoku, at Freshwater Beach. Images: Duke’s Day Website.

An important part of the festival is the Duke Shorts Video Exhibition, presented in association with Panasonic and featuring LUMIX ambassador and legendary surf film maker, Jack McCoy.

Duke Shorts is an opportunity for emerging film makers to create a short surf film, based around the themes of the surfing community’s respect for the ocean and environment and/or the great Duke Kahanamoku. Finalists will have their films shown before Jack McCoy’s critically acclaimed “A Deeper Shade of Blue”, in front of thousands of people, at the finale of the Duke’s Day on Saturday January 10th, 2015. The winner will take home a Panasonic LUMIX GH4 camera with 12-35mm F2.8 lens, valued at $2999 (click here to see how to participate).

We spoke to Jack McCoy himself to get the low-down on “The Duke” and this exciting short film competition.

Jack McCoy on Duke’s Day
“You know I’ve been going to the Duke’s Ocean Fest in Hawaii for the past twelve years; it’s a celebration they have in Hawaii for Duke’s birthday on August 4th and I’ve been invited to go there and show my films and be a part of the event which is really special honour because all kinds of really great people in the surfing world are part of it,” Jack said.

Jack McCoy on “The Duke”
“I met Duke when I was a little boy and I’d like to think that he passed on the spirit of Aloha to me. I met him through my father’s TV show. He introduced me to the Duke when I was 13 and I shook hands with him and said Aloha. But my Dad introduced me as Jack Junior and it pissed me off! Then about five years later, I went to a promotion and he was signing autographs and you got a picture of him. I walked up and he looked up said “ahhh, Jack Junior!” I still have that picture today, it’s quite special,” Jack said.

“So anyway I’m a big fan of the Duke, he was a very special human being, and he presented Hawaii to the world back in the day when it was very little known about it. It was his great swimming that took him around the world but wherever he went, he did try and turn people onto surfing.”

“Today anybody can make a film, so this is really an opportunity for anyone who is keen enough to really tell a story” – Jack McCoy.

“One of the objectives is that they talk about the environment and/or the Duke. That’s sort of the purpose of the festival – to acknowledge today’s environmental crisis that’s going on in the world. This shorts comp is to raise awareness, especially with younger kids and younger filmmakers. If we can start with the young kids, we can actually hopefully develop and change the way of thinking. That’s why we are focusing on that.”

Jack McCoy on the GH4
“This particular GH4 camera, I cannot say enough great things it. I just love the size of the camera and the quality. And being able to do so many different things with it. You know, with surfing you have quite a variety of lenses that allow me to shoot really tightly and you do have to go back to some of the old school methods, which is to manually adjust those longer lenses. But Panasonic has thought of that and built in tools that allow you to very easily see when you’re in focus or not by a certain gradient of the pictures. So for me the camera has all the things that I need to create great little films. I cannot think of a better camera for a young up and coming film maker – or even for anybody who is already making films,” Jack said.

Find out more about Duke Shorts.
Check out the Duke’s Day 2015 events.
Go to the official GH4 product page.