It was 1977 when we introduced the world sensation ‘Maclord’, the first VHS video tape recorder for the masses with up to 4-hour recording capability! VHS soon became a global video standard.

Today’s flashback might not feel so far away for some people, while others will have never even laid their hands upon one of these products. The Video Home System, better known as VHS, opened up whole new worlds of entertainment for couch potatoes of the 70s.

Seeing the old VHS tapes, and Videocassette recorders (VCRs) really are a blast from the past… they are somehow able to induce total nostalgia despite only being fully phased out in favour of DVDs in the last decade or so.

Panasonic began basic research into video technology as far back as 1953, releasing its first professional and consumer models in 1963, and by 1976 was an industry frontrunner selling the VX2000 VCR manufactured by Matsushita Kotobuki Electronic Industries. The success of VHS recording technology – created by Panasonic and JVC in 1976 – started a year later and it was achieved by corporations working together towards equipment compatibility .

It was 1977 when Panasonic released MacLord, its first brand of VHS video cassette recorders, which featured long recording time and bright, clear images. Demand swelled and VHS was hailed as the most ‘important advance in entertainment since television’. By 1983, Panasonic had already produced 10 million VCRs and by 1987, the format had become a world standard.

The “2-to-4-hour VHS VTR”, the VBT200, was developed to meet the consumer desire to record full-length broadcasts of American football games, an improvement over the recording time of 2 hours with the conventional VHS system.

In the last few years entertainment formats have become so advanced that it’s hard to believe VHS stuck around for so long. First it was knocked out by DVD, which in turn was superseded by Blu-ray, which looks quite old-fashioned next to cable TV, on-demand viewing and high-speed downloads. Maybe in a few years our favourite shows can just be streamed directly into our brains?

Click here to have a look at our 2014 range of DVD and Blu-Ray recorders. 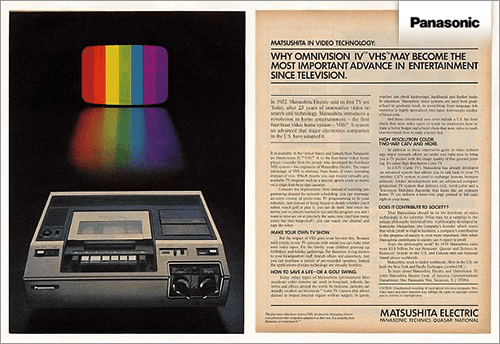